Turning a regressive tax regime into a fair one

You've heard that line about how the only two certainties are taxes and death....

No one reasonably argues that we don't need taxes in modern society. But we do spend a lot of time debating who should pay those taxes.

Most of our tax structures fall into two broad buckets:

Progressive taxes are where the wealthy pay a higher tax rate. The federal income tax is an example of this. The top income bracket pays 37%. The bottom one pays 10%.

Flat taxes (aka "proportional taxes") are where everyone pays the same tax rate. Sales tax is an example. In San Francisco, for example, everyone pays a flat 8.5% regardless of whether they are rich or poor.

(Side note: Some would argue that sales taxes have a regressive impact because poorer people consume more of their wealth proportionally. This is beyond the scope of this article.)

What about Regressive taxes?

Of course, there is a third kind of tax - a regressive tax - one where the wealthy pay a lower rate than everyone else. You might think that regressive-by-design taxes don't actually exist in America in the 21st Century.

But unfortunately they do. And in California nonetheless.

Under Prop 13, the more wealthy you've become (as a result of your home appreciating), the less tax (as a % of its value) you pay.

Let's look at one example: 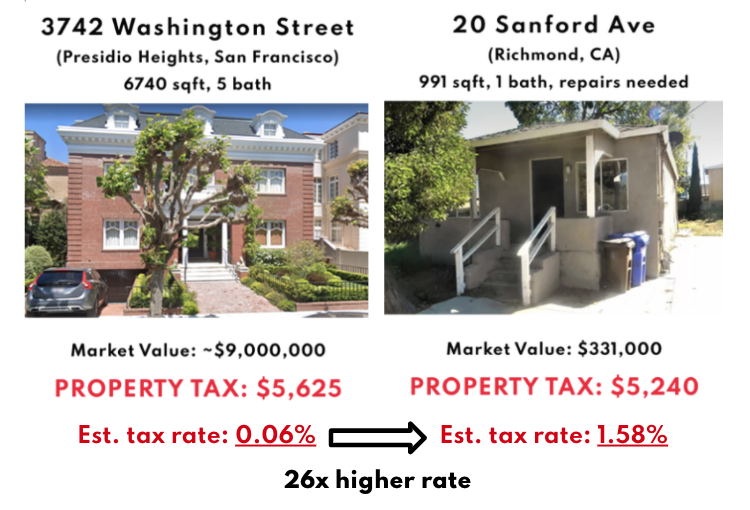 The home on the left - worth $9m - is levied a minuscule tax rate while the one on the right - one of the cheapest in the entire Bay Area - pays 26x higher.

The home on the left has made its owner very wealthy by producing millions of dollars in appreciation. The home on the right was recently purchased and has generated little or no wealth for its owner.

Instead we have a system where the house on the right, in essence, subsidizes the one on the left to the tune of a 26x difference in tax rate.

Let's call anyone who has had their home appreciate at least $1m a "Housing Millionaire."
‍
Note: This does NOT mean merely that their house is worth at least a million dollars. It means their house has increased at least $1m in value since they bought it, making them at least $1m richer.

Our dataset shows that 20% of Bay Area homeowners - 250k homes - are estimated to be Housing Millionaires.

And here's the kicker: While the average new homeowner in the Bay Area pays 1.26% in property tax, Housing Millionaires only pay 0.4% on average.

You can find our detailed post about the mechanics and consequences of property tax subsidies here along with a house-by-house map.

While the average new homeowner in the Bay Area pays 1.26% property tax, Housing Millionaires only pay 0.40% tax on average.

In a "flat" system, Housing Millionaires would pay the same rate as new homeowners.

In a "progressive" system, Housing Millionaires would pay a higher rate.

In the current system, Housing Millionaires pay a lower rate. That's why it's regressive.

Topic of this post:
What would it look like if California moved from its current Regressive Tax (Prop 13) to a Flat Tax - where everyone pays the same rate?

We are going to be conservative here and just consider a flat tax and not a progressive tax.

Changing to a flat tax is not some crazy pie-in-the-sky innovation ... in fact, a flat tax is how every other state in the US does it.  There are, of course, a ton of details and differences that are important. But California is the only state in the US that doesn't reassess their homes when they make their owners wealthy.

There are different options for enacting a flat tax. And these options will appeal to different folks. We'll explore two flat tax reform options below.

Reform option #1: For the small-government crowd
A revenue-neutral tax

A common refrain when discussing Prop 13 reform goes something like this: 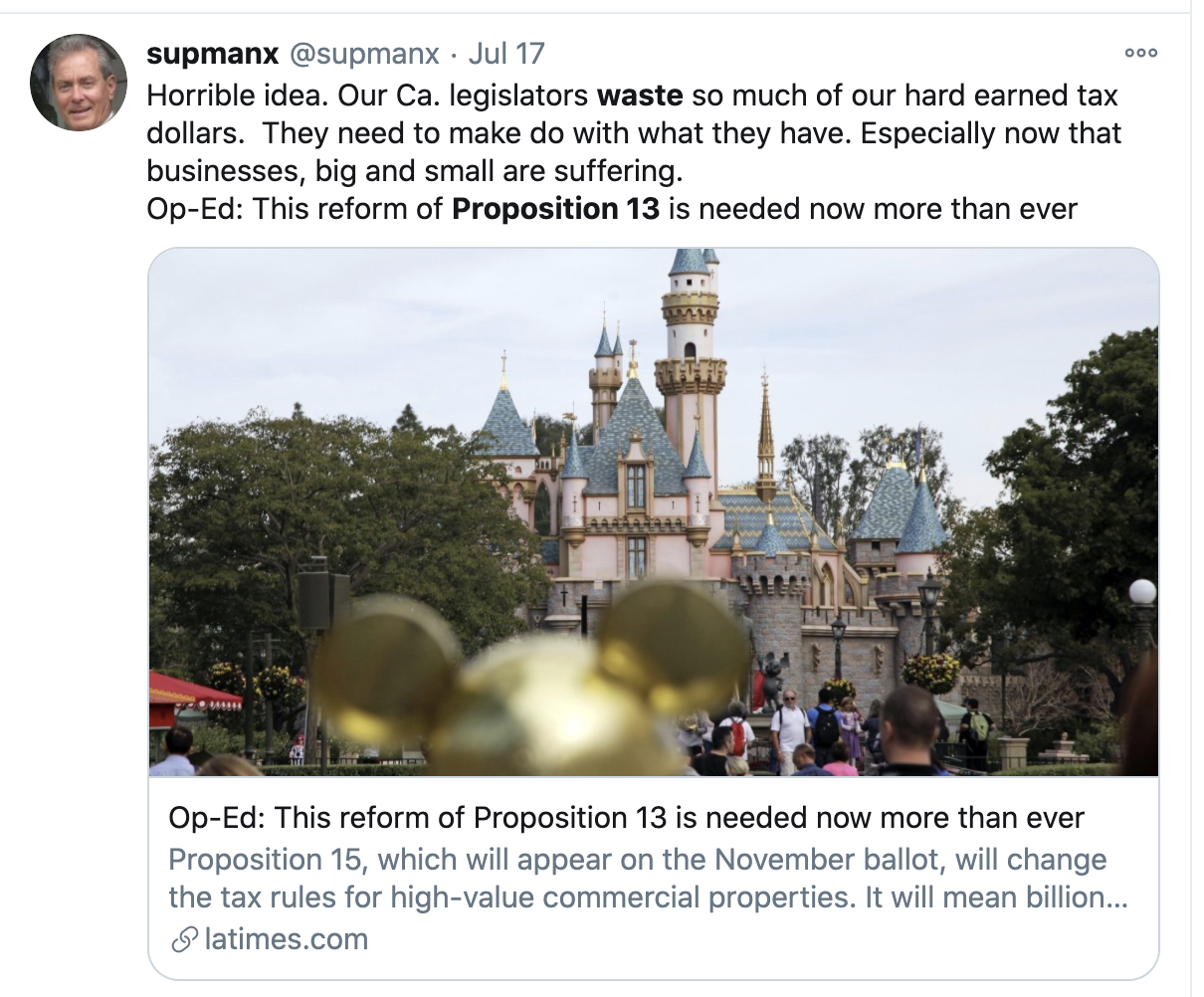 And we are totally sympathetic to this viewpoint. You might not want the overall tax burden on Californians to increase. You might not trust the government to spend new tax wisely.

For the purpose of this section, let's grant this point. Suppose that California doesn't raise another dime of total tax revenue.

Let's instead focus on the equitable distribution of the tax is already collects. This is called a "revenue-neutral" Prop 13 reform. We are not going to shift how much tax is collected in total. We are just going to shift who pays it so it's done in a flat rather than regressive way. So that Housing Millionaires pay the same rate as everyone else.

To do this, we will use our dataset of 1.2m Bay Area homes.The homes in this area pay approximately $9.4bn per year in property tax. But they do so at wildly different rates.
‍
Let's now raise that same $9.4bn, but do so in a way where everyone pays the same rate. What would that rate be?
‍
The houses in the dataset are worth a total of $1.6 trillion (side note: a gargantuan amount of money is held in housing wealth!). So we need a flat rate of 0.69% to raise the same $9.4bn.
‍
What's probably striking about this number to anyone whose bought a house in the last few years is that it is MUCH lower than what you pay now.
‍
Recent homebuyers in the Bay Area pay something in the 1.1 - 1.6% range (average in our dataset = 1.26%). This proposal would cut their tax bill nearly in half. And in fact, most homes - 53% of them to be exact - would experience a lower tax bill.

A revenue-neutral Prop 13 reform would have 53% of people paying less tax than before.

Now, of course, these 53% of homes are not going to be evenly distributed. The beneficiaries will generally be a) less wealthy b) have homes that have grown less in value c) have homes purchased more recently.

The below map shows what percentage of homes in a given city would have their tax rate reduced under this scheme. 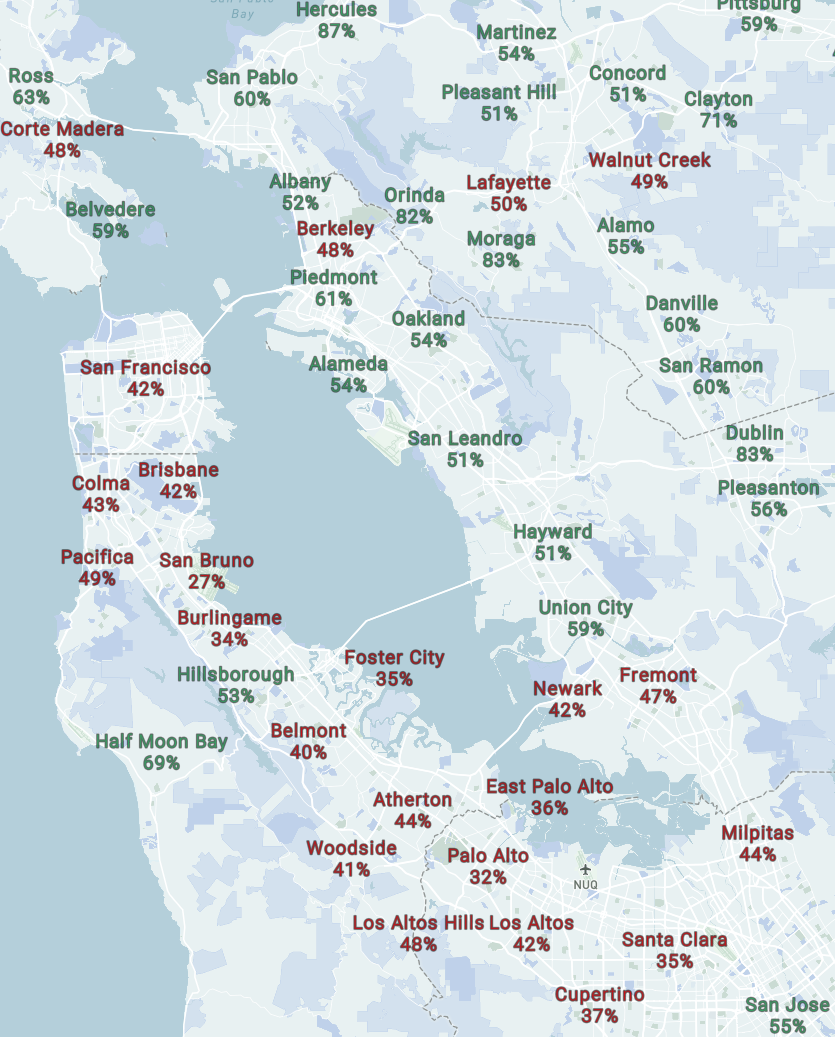 This below map shows how much the median yearly tax bill would change with a revenue-neutral flat tax. Similar story... 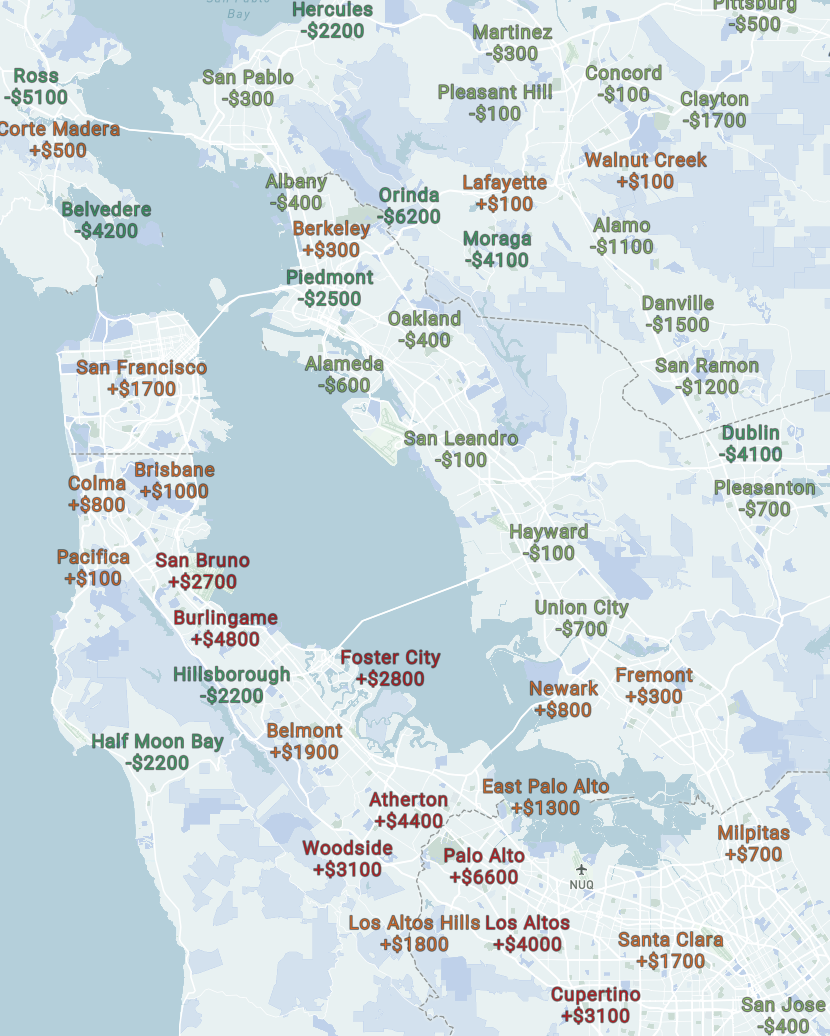 Here's the interactive version of the map with additional cities. Click on each city to see details. Zoom in to find details for how this would impact individual homes:

How "taxy" would this make CA?

What would shifting to a revenue-neutral flat tax, where everyone pays the same rate, do? It would put all homeowners in California in the cheapest third of states  - sandwiched between Tennessee and New Mexico. New homeowners would pay less. Housing Millionaires would pay more. 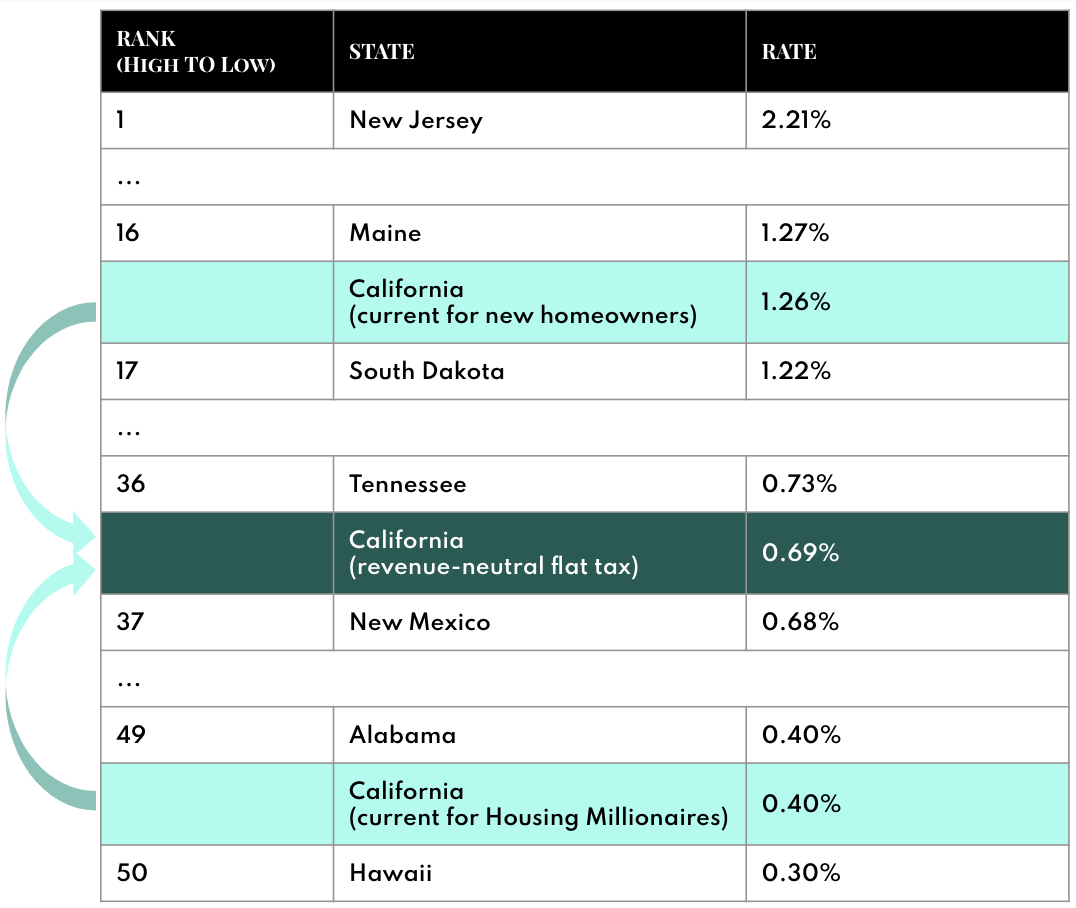 Reform option #2: For the pro-education crowd
Bringing CA's public education to parity with its wealth

California is the 7th wealthiest state in the US in terms of median household income. Given this, you might be surprised to learn that it ranks 21st in education spend per pupil. Combine this with some of the highest cost of living - and therefore teacher salaries - and the result is some of the largest classroom sizes in the country. A 2012 study puts California ranked 2nd to worst in the US (behind Utah) on student-teacher ratio in public K-12 classrooms.

(Side note: There is a lot of methodological debate on how to do these rankings. The NCES data referenced above is the most generous. Other sources rank CA's spend per pupil as low as 46th amongst US states after accounting for cost of of living. Gavin Newsom recently said 41st in a speech. Regardless of which source you choose, CA underspends significantly relative to its wealth.)

Suppose, the pro-education crowd offers this request: We merely want California to match its income ranking with its education spend ranking. We want to be #7 in the county in education spend per pupil (between New Hampshire and Massachusetts) just like we are in median income.

To do this, California would have to spend an additional 35% on education. California could achieve this with a flat tax rate of 1.15%, which is still less than what the typical new homeowner pays now in the Bay Area.

Ok, show me the map

Here's what property tax differences would look like in this pro-education scenario. Now only 14% of people would pay less tax than before. 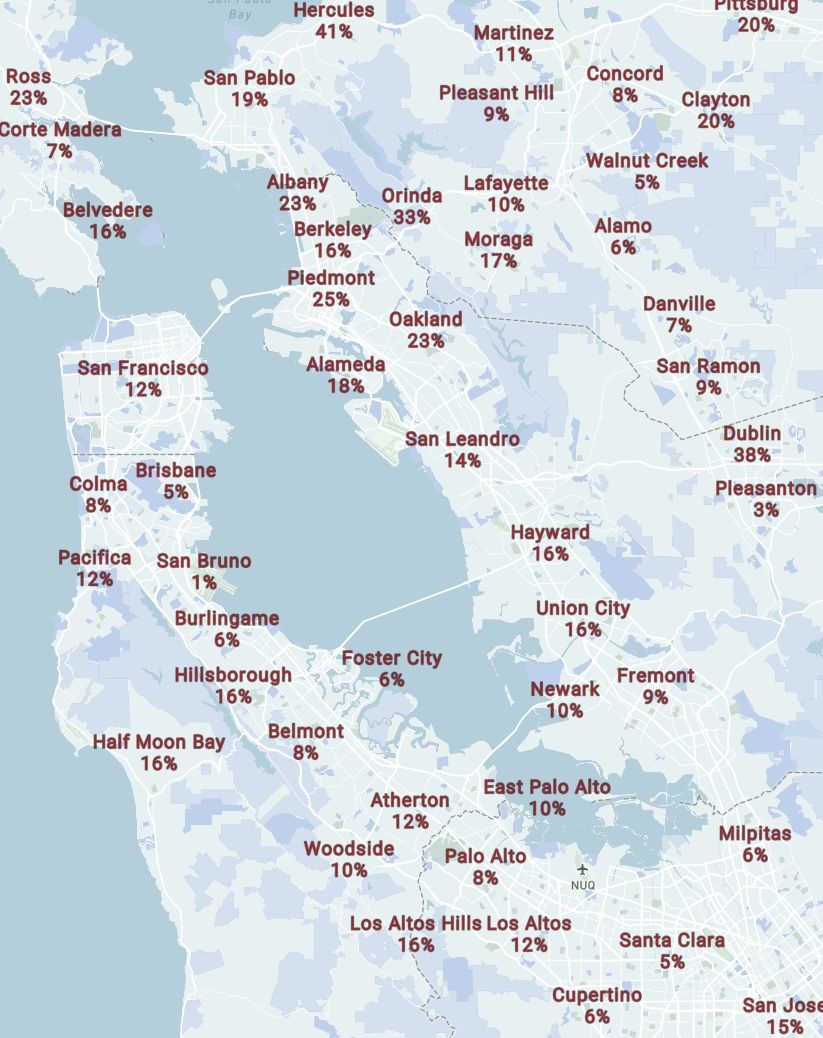 And here's how the median yearly tax bill would change. All cities would, on average pay more tax, but the cities with the largest increases in housing wealth would bear more of the burden. 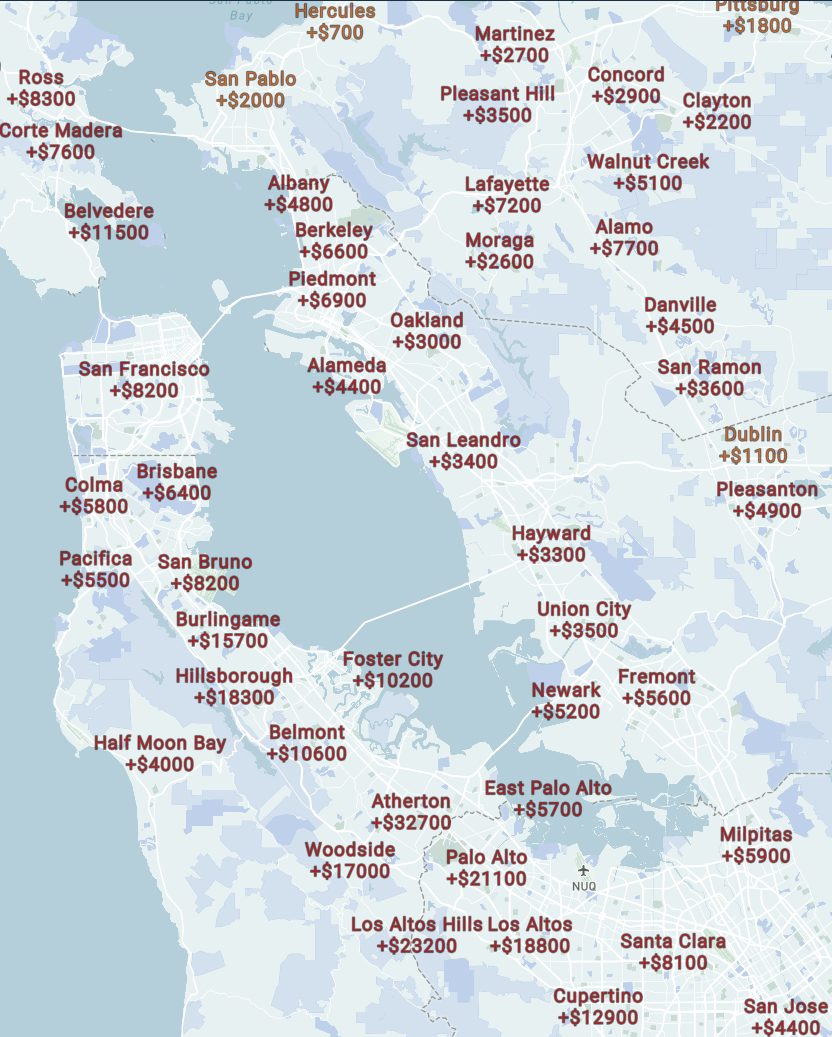 Change in median yearly tax with a flat tax of 1.15%

How about the tax ranking?

This scenario would land California #18 - between Massachusetts and Minnesota- on property tax burden relative to other states. New homeowners would still pay less. Most homeowners would pay more. 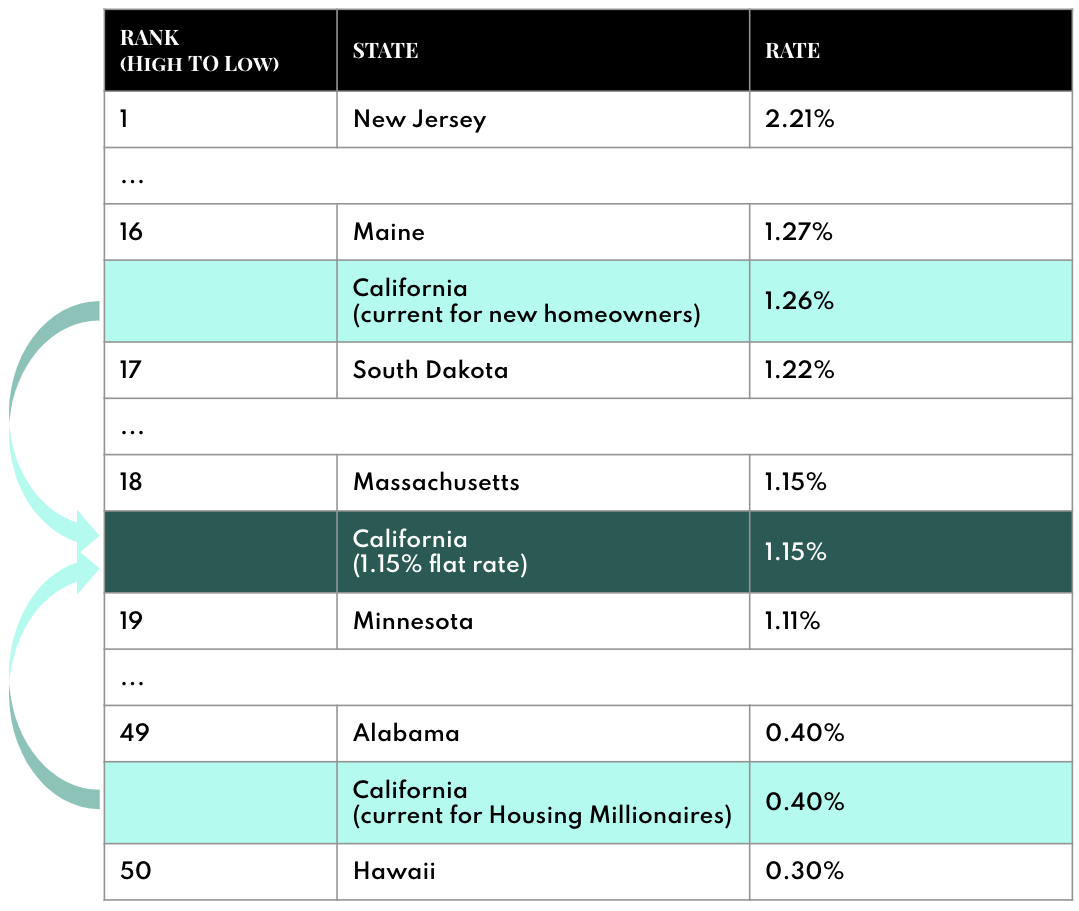 One thing that needs to be acknowledged is that we are focusing solely on property tax here. Income tax in California is quite high (largely to compensate for the lower property tax rates). A "total tax" ranking of California would likely put it higher than #18.

Here is one analysis of where CA stands now in terms of overall tax burden - 13th overall amongst US states. Using these figures, a 1.15% flat tax would bring CA up to #3 behind New York and Hawaii.

Conclusion: A double jackpot for homeowners becomes a single jackpot 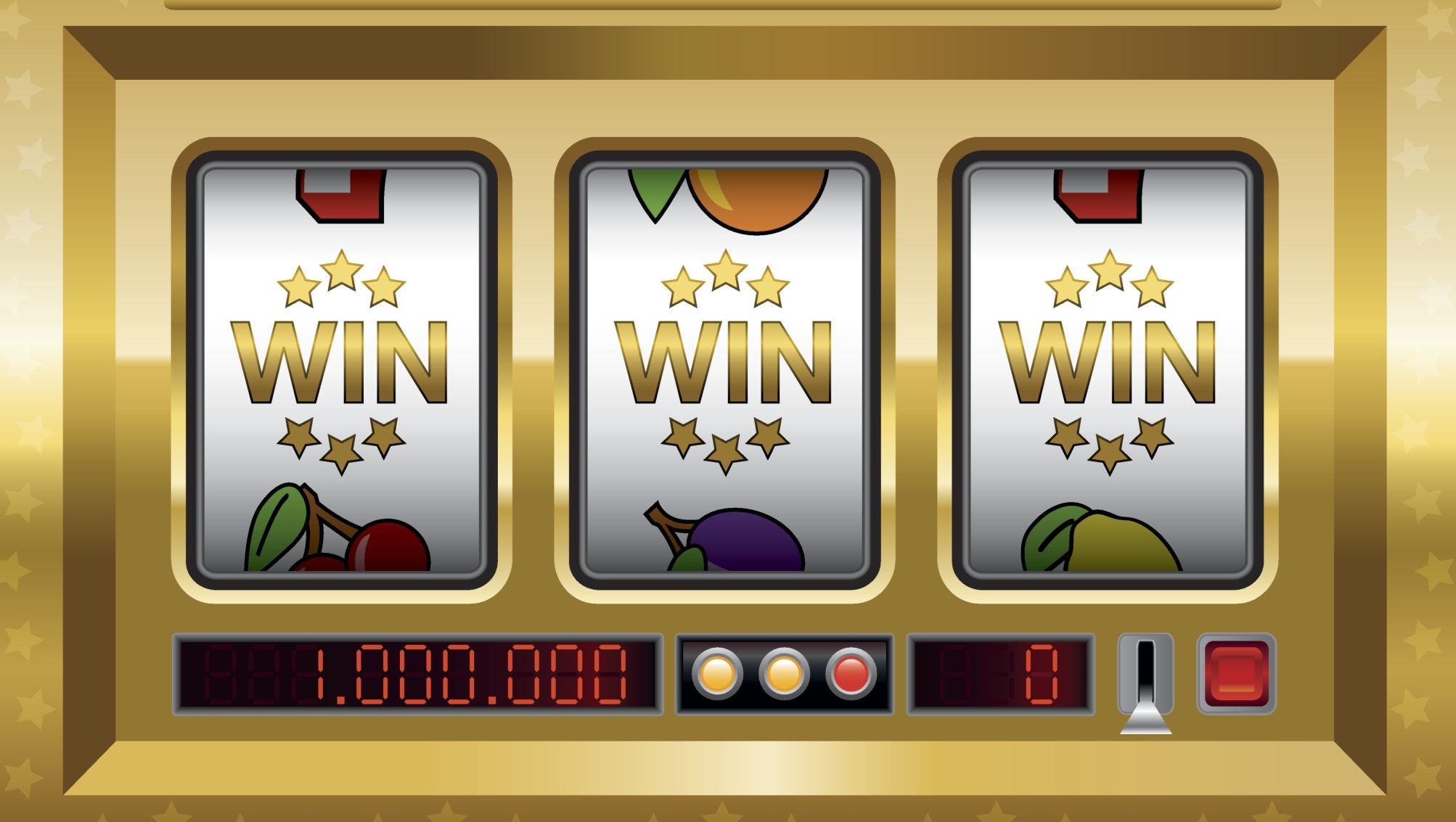 Long-time homeowners in CA have hit the double jackpot:
‍
Jackpot 1: Their homes have appreciated greatly in value, leading to 6 or 7 digit increases in personal wealth.

Jackpot 2: The tax regime has awarded them (and their heirs) large and permanent subsidies on their property tax. These subsidies are highly regressive and paid for by less wealthy residents.

The above flat tax reform proposals roll back this double jackpot into a single jackpot by ending the property tax cross-subsidies.

Even if implemented, Bay Area homeowners will still not regret buying homes when they did. Many will still be made rich by this choice to buy in the right place at the right time.

We estimate that of the 1.2m homes in our Bay Area dataset:

One reader shares his family's story:

My father bought a 4-bedroom home in Palo Alto for $289k in 1985, and sold it for $3M in 2012. During that time, he made more in home value appreciation than in cumulative salary for his full-time job as a healthcare executive. Between the mortgage interest deduction, Prop 13 subsidy, and $500k home sale tax exclusion, he also paid far less tax on his home earnings.

Of course, no one likes paying taxes. But given we've decided to have public services as a society, its incumbent on us to allocate the tax burden in a fair and just way.

We hope this post has you reflect on how Prop 13 and the property tax regime in California has inverted what we usually think of as fair and just. And how its regressiveness can be easily obscured by its complexity.

Too few people - particularly renters and new homeowners - understand how they are on the wrong end of the stick here. Also, too few homeowners think deeply about who and what compensates for their artificially frozen property tax rates.

If this helped you learn more about California's regressive tax system, please share it with a friend. And sign up below to get more updates and analysis.

Thank you! Your submission has been received!
Oops! Something went wrong while submitting the form.